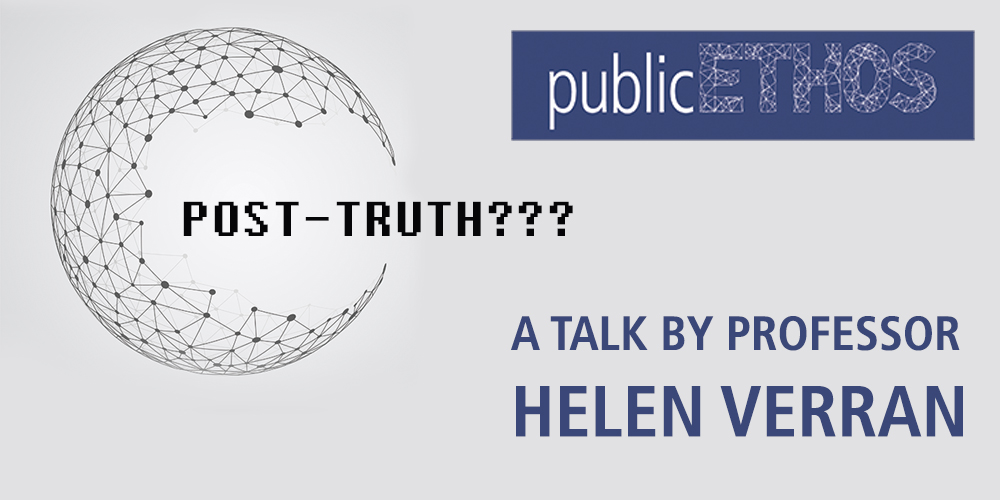 I am taking the Oxford Dictionaries’ 2016 ‘Word of the Year’ as occasion to publically perform STS. The three question marks point to three general theories, or stories, of truth that might be considered if we are to take seriously the claim made by the phrase ‘post-truth politics.’ Digital technologies are profoundly implicated in ‘doing’ these three contesting stories of truth, not only in the material technologies that allow varying types of facts to come to life, but also in the social and literary technologies through which facts move.

I am reading the phrase ‘post-truth politics’ as implying that in the contemporary political culture of parliamentary liberal-democratic polities, epistemics—assumed as expressed in good policy, run a poor second-best compared to emotions felt by a collective voting public. I begin with ‘post-facts’ which might be thought to name a condition, or state of affairs that lies within post-truth politics.  My first move mobilizes the STS trick of turning things into processes, nouns into verbs.  For the ordinary assumption that facts are things, albeit most often thought of as abstract things, I substitute the named process of ‘factization’. I must use an ugly English neologism, and rather than try to avoid such unseemliness, I see that as useful.  It makes my STS method explicit. Beginning in contrasting factizations I elaborate my first two stories of truth and begin my task of everting, showing some of what is ‘inside’, the popular analytic concept of post-truth.

Helen has had a varied career in the academy, teaching and researching—seven universities, four continents. Before taking up her professorship at Charles Darwin University, Helen spent twenty-five years teaching and researching in History and Philosophy of Science, at the University of Melbourne in Australia. Ethnographically collaborating with Yolngu Aboriginal knowledge authorities and scientists in Australia to Yoruba teachers in Nigeria, Helen has won several prestigious international prizes for her book ‘Science and an African Logic’ (Univ of Chicago Press, 2001).

Currently her research is concerned with governance, policy and politics in the areas of environmentalism and indigeneity, in Australia. In addition to working in several research projects with the Indigenous Knowledge and Governance Team, and supervising PhD students, Helen is the co-ordinator of the Northern Institute Research Student Network.