A tale from a data sprint series 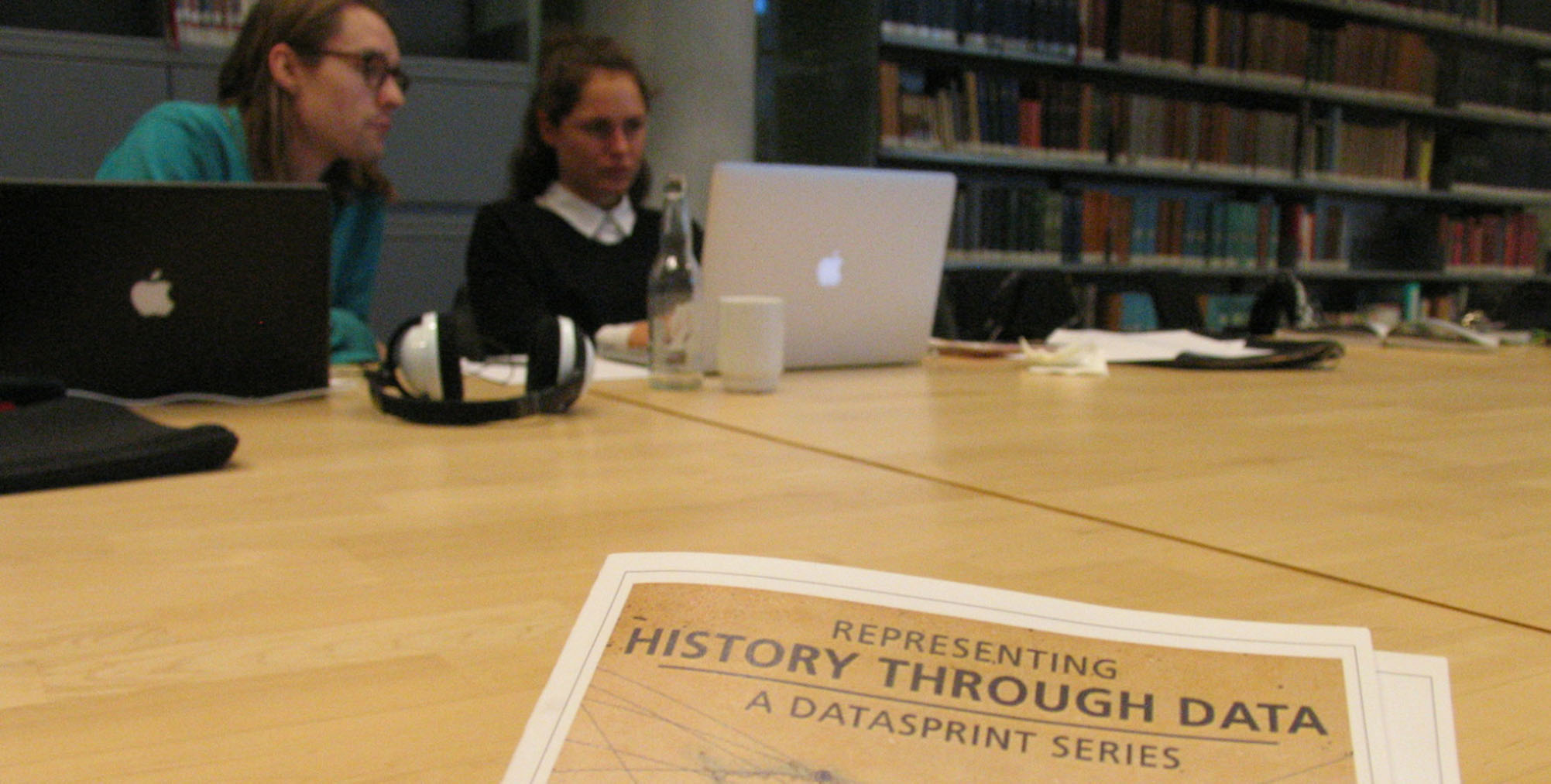 Written by Göde Both, who visited ITU Copenhagen and University of Copenhagen from August until November 2016. Rather than working with historical data, he usually engages in ethnographic research on the realities of self-driving car research. He is a member of the working group “Gender, Technology & Mobility” at TU Braunschweig.

A Review of the “Representing history through data” data sprint series.

When I first noticed the datasprint poster at the library of humanities, it evoked a mixed emotional response. I felt ignorant. I did not know Denmark had colonies in the West-Indies and I had not heard of a datasprint before. As a trained computer scientist I also felt a little bit of skepticism. I wondered do the workshop organizers seriously believe you can delegate the analytical competences of historians to software? I was curious about the datasprints, so I signed up.

I learned that datasprints are about working with sets of data during a set period of time. The three datasprints took place at the Black Diamond (Royal Library). The participants sat down at the large table at Kulturarvssalen. They ranged from master students to associate professors, academics working inside and outside academia with an impressive diversity of academic backgrounds, from humanities, over social sciences to formal sciences. Coming from Germany, the experience of sitting together at a large table regardless of age, status and discipline felt really Danish to me.

The Kulturarvssalen was not just a cozy place for collaboration. As someone pointed out during the first workshop, colonial legacies were not only present in the data sets we worked with. In fact, they were visible in plain view. The sugar warehouses opposite of the Black Diamond are silent witnesses of the wealth generated through the Danish West Indies.

Of maps, photos and spreadsheets

Not only the participants were diverse but also the types of data sets we were expected to work with. On the one end of the spectrum we had scans of historic maps from the period before the islands were sold to the US in 1917. They included maps, for instance, of plantations on the islands and of the kingdom of Denmark. A second data set consisted of historic photos taken on the islands, including post cards, topological photos, anthropological photos, and pictures from private collections.

Artist and cultural theorist Katrine Dirckinck-Holmfeld questioned the practice of making these pictures accessible and of putting them on display. During her presentation at the second datasprint, she argued that the pictures are violent and raised the political issue of how to handle racist materials from the archive properly.

On the other end of the spectrum, it was suggested to work with the Sound Toll Registers. This data set contains accounts of the cargo of every ship passing Elsinore (Helsingør) and paying the Sound dues during the period of 1497 to 1857. Finally, we were given access to the St. Croix Census records produced and transcribed by volunteers. This data set provided us with information such as living place, place of birth, sex and religion on those being registered on St. Croix during Danish rule. The latter data set turned out to be rather messy.  However, the datasprint organizers did a great job preparing us for the event by introducing us to software tools , such as openrefine, to clean up the data during a pre-datasprint workshop. They also provided us with the software Tableau which can be used to create interactive maps and dashboards.

As already hinted, a datasprint includes an assignment for the period of the sprints. We were divided into eight groups and expected to develop a product as for example an interactive map or a dashboard. During the first datasprint we brainstormed and pitched ideas for our group work. Although it turned out that a number of those who signed up did not make to the datasprint, the groups seemed to function none-the-less. During the final round of the first datasprint, I sensed a spirit of collective excitement and positive anticipation.

To my and others’ surprise, a number of participants dropped out between datasprint #1 and #2. Some mentioned other commitments as reasons for not attending. I guess it is hard to keep volunteers on track when the only incentive is personal fulfillment. During datasprint #3 the number of projects decreased from 8 to 5 varying in size from one to three members each.

What came out of it?

The resulting products and projects were as diverse as were the participants and data sets. Commemorating the selling of the islands 100 years ago, one group created an “audiosary”.  Using the St. Croix census they asked, can audio be a means of data visualization? In providing an answer they coded a program generating colorful audio-visualizations. The program transformed the data set into comparable data points. Based on how often a data point occurs, the resulting music and visuals are more monotonous. The group suggested this could not only be a way to explore how data is structured but that it could be used a display during an upcoming exhibition on the former Danish West Indies.

Two groups, albeit in different ways and by different means, set out to explore diversity within the former Danish West Indies. Using Tableau, one of the groups explored the birth places of those registered in the census. They found a mismatch between their impression from browsing the pictures of the archive and their findings based on the census data. Whereas the archive contains many photos of Danes living on the islands, the census data suggested that intra-islands migrants constituted a large portion of the population and the mostly male Danes were a small minority.

Using postcards and anthropological images from the archive, a second group explored intra-islands mobility with the curious case of the ‘Frenchies’. They are an ethnic minority of poor Whites originally from France who migrated to St. Thomas from the former Swedish colony St. Barths in the second half of 1900s. The group asked whether the pervasive stereotypes surrounding the Frenchies are perpetuated or challenged through the photos and postcards in the archive.

Another group, working with the St. Croix census data from 1841, produced a Tableau dashboard. Emphasizing that they were not historians, they said they were not trying to tell a specific story. Instead, they aimed at making the data accessible to those possessing the historical sensitivities:  https://public.tableau.com/profile/rainer.mesi#!/vizhome/shared/DBXN4GJP3

The last group analyzed and visualized the Sound Toll Registers between 1635 and 1857 and found that 85% of the ships contained sugar. They asked what the data set can tell us about the economic and cultural significance of the islands for the Danes? They traced the importance of sugar into historical paintings depicting the practice of hygge such as having cake and coffee.

An experience in learning

My initial skepticism was not accounted for. The participants were very careful with making knowledge claims. Software did not replace critical thinking. During the final round, many attendants framed their participation as a learning experience, for example, seeking out to do one thing and settling on another project. The members of the library also viewed the datasprints as an opportunity of learning by getting in touch with users of their data sets.

I would like to thank the organizers Mette Kia Krabbe Meyer, Michael Hockenhull, Lars Kjær, and Stig Sveningsen for providing the infrastructure for hygge and inspiring collaborations. I am grateful for the ETHOS lab for supporting my trip to the final datasprint.